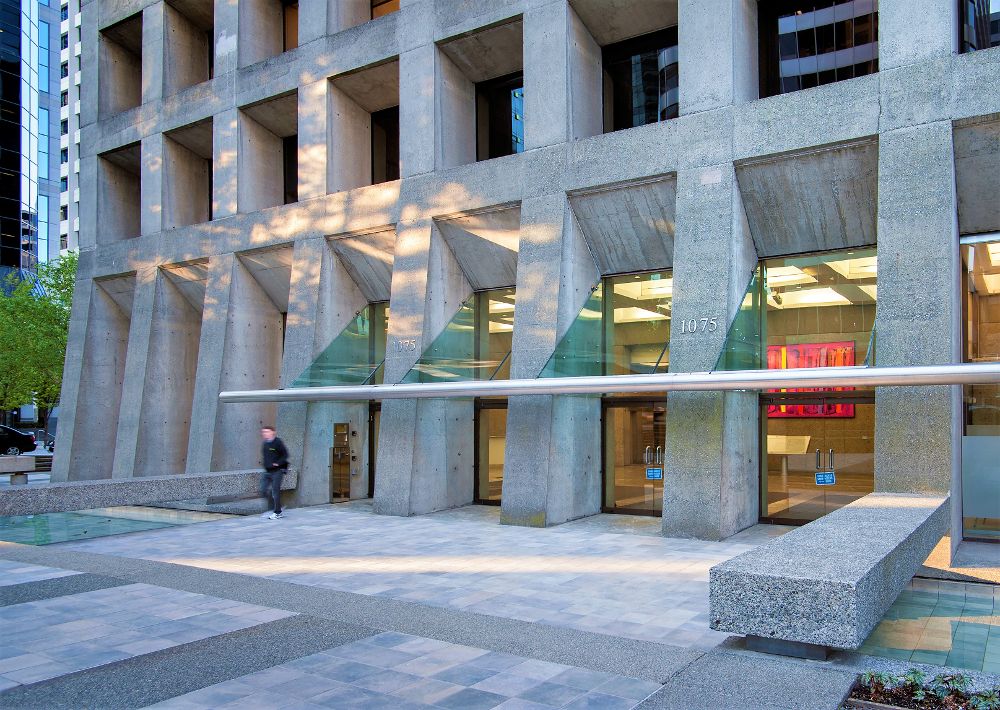 “It’s an interesting building because Erickson indeed did not do a lot of office/commercial buildings,” Don Luxton, senior cultural heritage advisor at Donald Luxton & Associates, said. “He was more interested in institutional buildings, universities, Robson Square and residential work, so this building is unusual.”

Built in 1968-69, MacBlo wanted something bold that would project its corporate image, Luxton said.

“Erickson responded to that by stepping back on-site, not coming up to the street side. It’s elegant, tall and tapered. It’s recognized by the design community as having aged extremely well, an Erickson masterwork.”

The renowned architect, who died 10 years ago at 84, loved concrete. He called it the “noble material” and talked of creating Doric facades with concrete, of using concrete the way classical Rome and Greece used marble.

Geoffrey Massey was also involved in the design of the building, which shows off Erickson’s love of concrete and exposure of structure, Luxton said.

“Just the purity of the concrete, it’s so crisp, it has such a refined sensibility,” he said.

The consortium that bought the building declined to say how much they paid, but the property was assessed at $255.117 million in 2018, up 20.6 per cent from its assessment of $211.555 million the year before.

The building previously sold for $76.8 million in 1999 after Weyerhaeuser bought MacBlo.

Erickson designed cultural and institutional buildings around the world and around the Lower Mainland, including the Vancouver Law Courts, Simon Fraser University, UBC’s Museum of Anthropology and the Vancouver Art Gallery.

The former MacBlo building is one of just nine office towers among the roughly 700 buildings he designed. It won several awards, such as BOMA’s building of the year in 1969, the Massey medal for architecture in 1970, and Design Canada’s concrete award certificate of merit in 1971.

In 1993 the city of Vancouver gave it Class-A heritage status, the highest classification, and in 2008 it was registered as a Canadian historic place.

“Seldom do esteemed office buildings go on the market, let alone a multi-award-winning building designed by Arthur Erickson,” Jon Stovell, president and CEO of Reliance Properties said. “For Vancouver, this is a very important building.

“It gives the impression of the solidity of heavy timbers the way it is slender and tapers on up.”

The building, almost 350,000 square feet, is fronted by West Georgia, Thurlow and Dunsmuir, and Erickson was forward-thinking enough to include a sunny south-facing pedestrian mall.

It is a bit different from Reliance’s other heritage properties, mostly in Gastown and Yaletown.

“It’s a really significant fit for us to have this heritage building,” Stovell said. “It’s relatively new compared to (buildings built in) the 1800s, but it is heritage.

“We have a large heritage portfolio and we love to renew these heritage buildings, love restoring them, and this new ownership group will honour this building’s iconic heritage status.”